With it’s beautiful golden roof, Jing’an is a truly stunning Buddhist Temple surrounded by the modern high rise buildings in the heart of Shanghai. The temple has been on this site since 1216, but the current temple was built in the Qing Dynasty and during the Cultural Revolution was converted into a Plastics Factory.  In 1983 it was returned to it’s original purpose and renovated. To get there, I rode the metro line 2 to Jing’an Temple station and used exit 1 to get to the Temple it’s self. When we had taken a guided tour of Shanghai on our first day, our guide had helped me figure out how to use the metro trains.

View from outside the Jing’an Temple.

The Temple is right in front of you as you exit the Metro Station, so I decided to walk around the outside of the temple first.

I’m glad I did, because it turns out you actually get the best view of the Temple Pagoda from outside, and see other nice details such as the Lion statues near the Grand Gate by the entrance.

You get a real feel for how the modern world has built up over the years around the historic temple.

I paid my CNY50 entrance fee, and entered the temple to the wafting scent of incense. 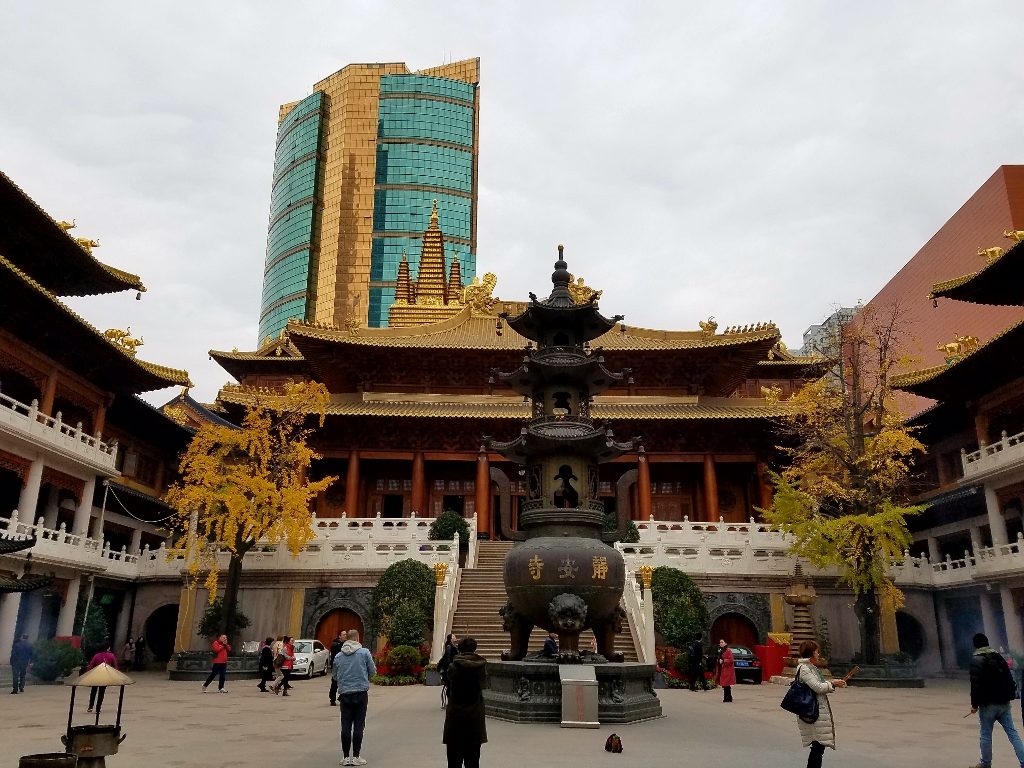 View as I entered the Temple.

I walked around the outer edge of the main courtyard of the temple, and into the smaller courtyard at the back where you can really admire all the beautiful wood and stonework details.

Buddha in the Precious Hall of the Great Hero.

In the centre of the temple is the Precious Hall of the Great Hero, and then around the perimeter are other halls, the Mahavira Hall housing the 11 ton, 12 ft tall white Jade Buddha, the largest sitting jade Buddha in China.

The Guanyin Hall has the Statue of the Guanyin Bodhistattva made from 1,000 year old Camphor wood and weighing about 5 tons.

Statue of the Guanyin Bodhisattva.

I probably spent well over 2 hours exploring the different levels and halls of the temple, and taking in all the fabulous details.  It was so peaceful and spiritural with the bells chiming in the wind and blowing through the Ginkgo trees in the courtyard, as you wandered past rooms with Monks praying and visitors leaving their offerings and lighting incense.   A magical temple and well worth a visit while in Shanghai.

My favourite Buddha at Jing’an.

This site uses Akismet to reduce spam. Learn how your comment data is processed.